PSA HOW DOES IT WORK?

Pressure Swing Adsorption (PSA), is the simple process of separating gases that make up the air we breathe, at low pressure and room temperature.

PSA is a simple process used to separate a target gas species from a mixture of unwanted gases under pressure.  The unwanted gas species is separated according to its molecular characteristics and affinity for a particular adsorbent material.  The process operates at room temperature and differs significantly from high volume separation methods such as cryogenic distillation.  A single or combination of media (e.g. zeolites, active carbon or carbon molecular sieves) are used to preferentially or sequentially adsorb the unwanted gas species at high pressure allowing the target gas species to flow through the media.  Once saturated the media then swings to depressurization mode to desorb the unwanted gases as a waste gas stream.

Using two adsorbent vessels (pictured opposite) allows near-continuous production of the target gas.  Because there is a pause in the cycle, as the two vessels equalize pressure, the system requires a buffer vessel to allow uninterrupted supply.

In the case of nitrogen gas production, compressed air, a mixture of mainly Nitrogen (78%), Oxygen (20.9%), Argon (0.9%) passes through a refrigerated dryer to remove atmospheric moisture then onto a bed of carbon molecular sieves.  The bed is pressurized with the compressed air and no gas is released to storage until the pressure is high enough to adsorb the unwanted gases (oxygen, argon and carbon dioxide (0.04%).  The enriched nitrogen gas then passes onto the storage vessel.  Once the bed is saturated with impurities the flow of nitrogen gas stops and the cycle switches to the second bed.  In order to increase efficiency the pressure from the first bed is allowed to equalize with the second bed, then once equalized, the flow of compressed air begins to fill the second bed to operational pressure and the cycle repeats.  In the meantime the impurities are released from the first bed by slowly venting to atmosphere.

Using two adsorbent vessels allows near-continuous production of the target gas. It also permits so-called pressure equalization, where the gas leaving the vessel being depressurized is used to partially pressurize the second vessel. This results in significant energy savings, and is common industrial practice. 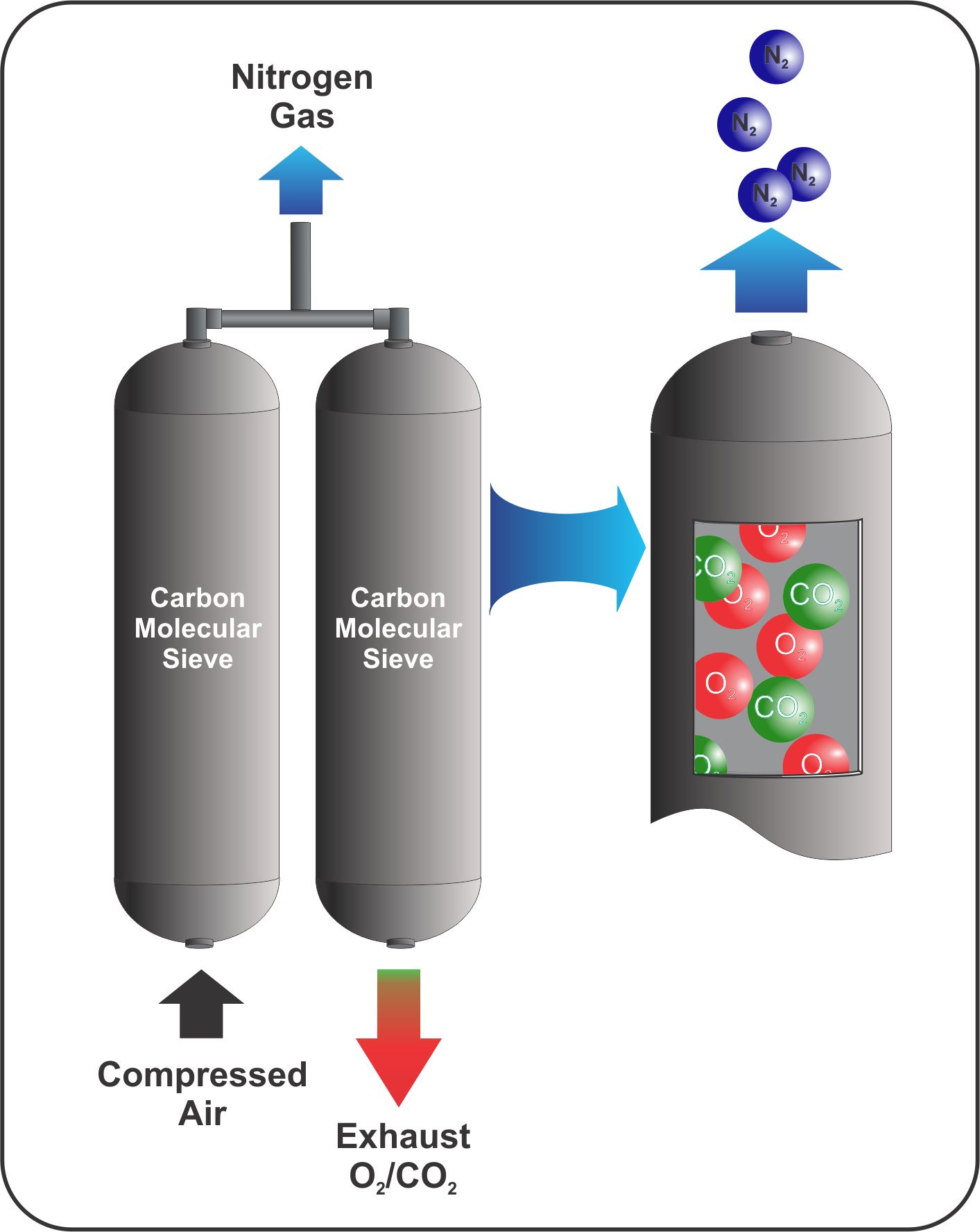